The dreaded iPhone 'Not Delivered' message

Since the sad demise of Windows Phone, I moved to Android, using a Samsung Galaxy S7 Edge. All went swimmingly at first - the S7 edge is a great phone, and Android was far better than my original experience in the early days.

However, Samsung tend to bloat the phone with duplicated and unwanted applications that I neither wanted or used. The final straw was Samsung Pay. I was using Android Pay so I didn't want or need Samsung Pay. I couldn't uninstall it, and using the excellent GSAM battery monitor I discovered tha it was taking almost 8 percent of my battery usage. 8 percent!! I wasn't even using it. I tried disabling it but it kept coming back.

I decided to dip my toes in the iPhone market. I had never been a great fan of the iPhone, don't like the interface and don't like the hype. I sold the iPod that I used for app testing, and bought a refurbished iPhone 6s to try it out. I loaded the apps I used, and I was surprised. It just works! Apps that I had to download on the S7 were built into the iPhone. I was sold!

We did some swapping of phones. I bought an iPhone 8 Plus, gave my wife the 6s in exchange for her Nokia 6 which I took over, and I sold the S7 Edge.

All went swimmingly initially, but then my wife found out that she couldn't send SMS messages to some of her contacts. Then I found the same problem. We got the dreaded red ! and Not Delivered. 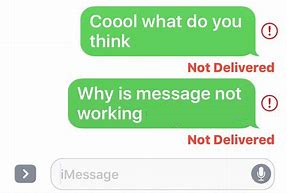 I trawled the web, found loads of suggested solutions, but none worked.  I finally spoke to Apple support who also tried a couple of things, and then blamed the carrier, as we are both on 3.

I spoke to 3 who checked everything out, and gave things a clean bill of health. They suggested a total reset of the phone would fix it - but I didn't want to do that. I swapped my 3 sim for a GiffGaff sim, and still couldn't send the message - not a carrier problem then.

Spoke to Apple support again, who reviewed the original case notes, and put me through to a tecnichal supervisor. We checked a few things out, and then she suggested deleting the conversation. Simply tap and hold the contact in 'Messages', swipe left, and choose delete.

So, if you get the same message, try this as a first step, instead of resetting network settings etc. - it may just work for you.