Normally we only write technical blogs here at APPA Mundi, but the arrival of a brand new pair of Nokia Purity Pro Headphones by Nokia persuaded me to change my mind.

These headphones arrived courtesy of the Nokia DVLUP program, and I got them with my reward points. For those who don't know about the DVLUP program, it is a great incentive from Nokia to encourage Windows Phone development. Basically, you write apps, do challenges and you get points, and to quote an old UK game show, points mean prizes. Prizes include hardware, software, consultancy and even MSDN subscriptions. I will be writing more about the design consultancy next month after I experience it.

So, back to the headphones. I had waited a long time for these, as they are so popular, the DVLUP program had no stock. My previous headphones had been Beats - which were great headphones, but didn't work properly with my Nokia Lumia 920. The headphones were great, but the 'pause' button didn't work with my Windows Phones, making them a PITA to use, even though the sound quality was superb.

I did lots of research before deciding to part with my hard-earned DVLUP points. These are not budget headphones, they are over £250 generally, and for a similar number of points I could have got the JBL PowerUp Wireless Charging Speaker I have been lusting over, or a few more points would have got me the sleek Lumia 925.

So it was with great anticipation that I opened the parcel delivered early yesterday morning. First impressions were similar to the Beats - an awful lot of thought (and money!) had gone into the box and presentation of the headphones. The box contains the headphones, a 3.5mm cable, a USB charging cable, a carrying case, and a manual thicker than you get for some PC's. 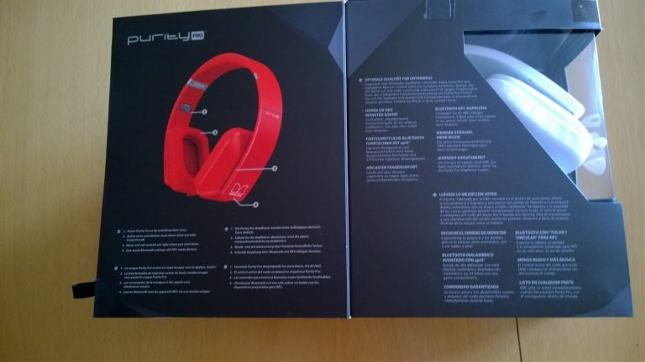 Whilst I charged them up, I read the manual, and started playing about with them. They support Bluetooth (with NFC) and a 3.5mm cable, and also support multiple connections. The first job was to pair them with my Lumia 1020. I turned the headphones on (which you do simply by opening them), held the phone up to the bottom left, and was immediately prompted to pair them. I then went on to pair them with my Windows 8.1 box, Windows Surface RT, iPod Touch, and Advent Tegra Android tablet. You initiate pairing by holding down the Bluetooth button for 2 seconds, and then follow the instructions on your device. This was all done without fuss on all devices, and no problems were found.

Looking at the controls, the controls actually go at the back when you put the headphones on, so that saves you looking for 'L' and 'R', especially when you have no glasses on. The right hand side contains the volume controls - up and down obviously. The left hand side contains the multi function controls which does play, pause, forward and back. This control also controls the phone functions. When you open the phones up, while paired to the Lumia, you get a nice message telling you the battery level and then 'Connected'.

Double-tap the middle control to redial the last number; tap and hold the middle control and this allows you to start voice commands, and all that this entails. When you get an incoming call you hear the familiar Nokia ring tone in you ears - simply tap on the middle control to accept the call. If you want to reject the call, tap the multi-function button twice. Text messages are announced, and you can say 'read it' or 'ignore'. Testing text messaging, I never had to repeat the instructions, and replying to text messages using speech was remarkably accurate.

So - what about the sound, which is the major functions of the headphones! They are noise cancelling, and the noise cancelling is turned on automatically when you open the headphones to put them on. As opening up the headphones is the only way to turn them on, then if you remove them from over your ears and leave them round your neck, they are still playing. The noise cancelling seems excellent - not had chance to try it on a flight yet, but other reviews say they work well on flights. The sound is also excellent - no distortion, and you get a lovely rich sound. Being an old fart, I tend to listen to older music, mainly soul and northern soul. All I can say is that the music sounds better through theses headphones, than any I have ever had - including the beats. Also - A Day In The Life from The Beatles always a good test sounds excellent. I also tried them with the 'headphone test' page (which works from the phone too), and they passed with flying colours.

The integration to Lumia Windows Phone is seamless, and you get some extra functionality. Click on Settings>Accessories and then click on 'Add', and add your headphones. You will see the headphones on your accessories screen, complete with an estimate of playback time (reported to be 24 hours from a full charge). If you then pin the screen to your start screen, you get the information on your start screen.

I tend to listen to music and podcasts when out walking the dog - and I have noticed that I hear the wind whistling past the headphones on a breezy day - but not enough to spoil the sound. I look forward to trying them out on my next flight, and to them drowning out the background noise.

All in all I am very pleased with my choice, and thanks to the DVLUP program for making them available as rewards, as I very much doubt I would have justified the cost if I was paying out cold hard cash. If you are a Windows Phone Developer, and DVLUP is available in your country, I would advise signing up, and earning some points.